Last night I had a travel experience that was less than spectacular. A peaceful train ride, and dinner with my Chinese taiji family slowly devolved into a potential "Hostel" remake. After a perfect dinner, I assured my Chinese friends that I knew Nanjing well enough, and could find the hotel by myself. I showed them the address that Expedia provided, all agreed it was an easy walk, and we went in opposite directions. I have walked this street dozens of times, but as I got to the intersection where Expedia thought the hotel would be, I realized that something was off in the street numbers. I asked a few people, including a concierge at another hotel, and they all pointed me in different directions.

Thankfully I found a Starbucks, and though it was closed, I stood close enough to borrow their wifi. Of course, the Expedia messenger and map crashed because they are powered by Google. No Google in China... Even with the VPN I couldn’t get more info. I started off in what I thought would be the right direction judging by the street numbers. I couldn’t really hail a taxi because the numbers kept jumping, and for what it’s worth, I only had the address in English, and taxi drivers in China never speak English. I finally found the right block after about an hour’s walk (literally across town), and there were 2 hotels at the same address, neither of which accepted foreigners, or knew what Expedia was. No one at either hotel knew of the other, or the place I was looking for.

I went into a lobby at the next building which finally matched the picture from the website, but it was not a hotel, at all. It was some strange gym, office building, karaoke bar, and a few other “interesting” businesses. The security guards, and a very nice Australian guy who was fluent in Mandarin, had no idea what hotel I was looking for. So I wandered a bit asking everyone I could find.

Tired, really sweaty and frustrated, I walked back to the Sofitel I had passed earlier (and a place I had stayed many times in the past). I hobbled into the lobby like a battered James Bond escaping from North Korea, handed my passport over, and said I would like a room please. She started typing and said “We only have a suite tonight.“ Noooo, but I remained calm and asked the price, I must’ve turned pale, but she quickly covered for me and said, “Mr. Hoffman it looks like you’ve stayed with us several times in the past, please wait.” Some words were exchanged with the manager, and I got the suite for the regular room price for 2 nights!!!!!

Unlike a James Bond movie, a beautiful foreign spy did not show up at my door later that night, but I did bask in the glory of a western bed, and bathroom, so much so that I almost pulled a Charlotte in the shower (that’s a Sex in the City reference…). Oddly at midnight I got a text message from the non-existent hotel asking if I would check in tonight. Apparently, even though I had no contact info, I was supposed to text message them from the lobby of the strange building. They would then take me up to their apartment where I would pay in cash, and then they would lead me to another floor where I would stay. Uh, thanks but no thanks. #expedia.comfail 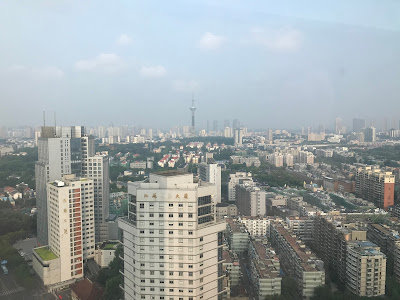 BTW, how exactly does James Bond travel the world with zero luggage?

You know how grappa is the dregs of wine pretending to be brandy. Bai jiu is the dregs of grappa pretending not to be lighter fluid. Tonight after clinic our last patient asked if he could take the whole clinic crew out for a Chinese banquet. This is a highly ritualized affair that makes the royal wedding look like a picnic, and something I haven't had to do in a longtime... Where you sit, when, how and what you drink, even how you toast and tap your glass is all choreographed. Luckily formalities in China have loosened, and being a foreigner allows you some leeway. But how you handle yourself can literally determine your future amongst your peers. Don’t drink, lose face, drink too much, you’re an idiot. Luckily I’ve seen this movie, I’m Irish, and I’ve been dutifully trainer by a Scottish friend, so I escaped with only a few glasses of the devils liquor, and handled myself accordingly.

Unfortunately you’re always wondering if you did everything correctly...
I should also mention we ate at a Chinese seafood restaurant. I’m pretty sure that this is where James Cameron and H.R. Giger got the idea for Alien. But I channeled my inner Anthony Bourdain and tried everything, even the underwater millipede they call mantis shrimp. The line from Apocalypse Now came to mind “if you eat this no one will ever question your bravery again.” But we did have some great food, including crawfish which are now in season here... 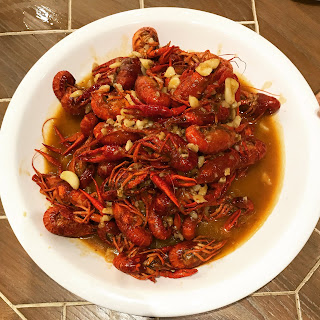