Professor Huo Chi-Kwang was born in Hebei Province, China. The Professor was a master of Chinese calligraphy, painting and poetry as well as philosophy and martial arts. His family had been noted scholars and calligraphers for 16 generations. Professor graduated from Beijing University. 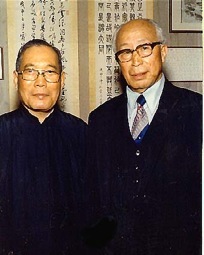 The professor had an incredibly well rounded training in martial arts. He studied taiji with Yang Shao-Hou (oldest brother of Yang Cheng Fu). He studied bagua and xing yi with Li Cun Yi, himself a student of Dong Hai Chuan the founder of bagua. Most famously he also studied bagua with Li Ching Yun, the famed Daoist who lived to the age of 256. He also studied taiji with Wang Yen-nien from who he learned the Yang Jia Michuan form.

Professor Huo also studied sword with two noted masters - Lee Ching-Lin, and Chang Chi, Jiang. Lee is said to have been the greatest swordsman of his time.

With the removal of Jiang Jieshi (Chiang Hai Shek), the Professor moved to Taiwan where he founded the Tai Chi Chuan Learning Society to study and research tai chi. He later founded the Chinese Cultural Academy in Evanston, Illinois.

My favorite part of the Professor's story is his time sharing an apartment with Chen Man Jing, and T.T. Liang upon moving to the USA. This is the equivalent of Michael Jordan, Kobe Bryant, and Larry Bird living together!!!!

The Professor was also lifelong friends with Kuo Lien Ying, who is also featured on this blog. The differences in the Professor's Yang Jia Michuan begins to make sense when you consider the influence that xing yi and Guang Ping taiji must have had on him. Further, Professor Huo was also friends with Lu Hung Bin, one of the worlds great bagua masters.