The importance of source in herbalism 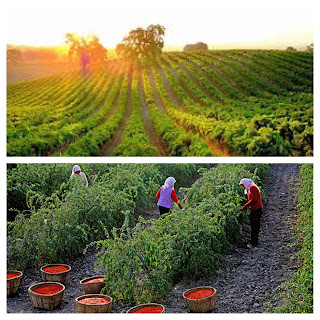 In French it is known as terroir, in Chinese di dao or dao di, the recognition that the earth where a particular crop is grown has significant impact on it's flavor and nutrient content, and that certain regions are well known, and may even produce the best examples of a given fruit, vegetable or herb. Many factors contribute to this importance of place  - the soil, the nutrient makeup of the subsoil, of course the climate and the micro-climate (such as in a valley or mountain slope), even the drainage of the soil and elevation can play a huge part in the character of an herb. Herbs from di dao sources are specifically known for their potency and effectiveness. Many herbs are so sensitive to their environment that they simply won't grow anywhere else. Goji berries are an interesting example as the plant will often grow here in southern California, but rarely ever fruits to the degree that it would in the mountains of China. Goji Berries in particular absorb many minerals from the soil, and great examples of Goji are not just sweet but very mineral rich in taste.

I often use wine as an example to my clients, and customers, as its an easy thing to experiment with. Taste a cabernet from Bordeaux, Tuscany, and Northern California and you will find incredibly different flavor profiles. With a little research you can take this further, and actually find vineyards in all 3 places that were started from the same root stock. Yet the geography in which they developed has impacted their flavor to the extent that they are unrecognizable from each other. Great winemakers know this and will often barrel grapes from different parts of their vineyard individually, and then blend them together during bottling to yield the best flavor profile.

This was illustrated to me once during a tour of the cellars at David Arthur, a vineyard in Napa Valley. The owner, and winemaker let us taste directly from the barrels which were marked with elevation, and which side of the mountain they were on. Although they were of the same root stock, their flavors were very different, and each found their way in to the final blend in varying amounts.

Why is this important in Chinese medicine and herbalism? Two of the primary factors we learn about when studying Chinese herbalism are taste and temperature. It is these two important factors which help determine where the herb travels in the body, and what conditions the herb helps treat. Formulas are balanced not just by the function or category of the individual herbs, but also by their individual taste and temperature. If we're not cognizant of our herbal sources, how can we be sure the herb is going to perform as intended. The Chinese Materia Medica has been expanded, edited, and critiqued since the time of Shen Nong (2800 B.C.), and since the publication of the Shennong Ben Cao Jing, 神农本草经 (200-250 A.D.). The region where an herb is sourced is always mentioned with each herb entry in the in the Ben Cao, and continues in the modern Materia Medica. In some cases, herbs from different regions, even though they are the exact same species, are indicated for different illnesses. There are now departments in Chinese Universities devoted to the research of herbs, their source, and their effectiveness in treatment. You can often find these studies posted on Pubmed, and a few are listed below for easy reference.

With all of the negative press coming out of China about food contamination and pollution, it is our natural instinct to shut out all products from China. However, I often stress that China is a very large country, and the vast majority of the country is still extremely rural, and unpolluted. Imagine flying into Newark, NJ or Long Beach, CA and believing that surely Montana, and South Dakota must look the same. Or that because Jack In the Box had issues with E.Coli poisoning years ago that all American food is poison. These are some of the mindsets that I encounter when I mention Chinese herbs.

Of course, as Americans we are concerned with our food sources, and we often look to organic labels as a fail safe. Yet few people know that there are over 20 pesticides approved for use in organic farming. And that the farmers are only required to document the use of pesticides, not to provide test results. The USDA only tests about 5% of the farms each year.

When it comes to herb sources I look to companies that source their herbs from the regions known to produce the best varietal of a given herb. In many cases the herb company has a relationship with individual farmers and specific villages, and is not purchasing their herbs through third parties or wholesalers. I also look to their authentication and testing procedures. Only then do I decide to carry or recommend an herb or herbal company. Reputable companies will provide test results and COA's for each batch of herbs. I would encourage herbal consumers and practitioners to look deeply at their herbal companies and their sources when choosing products. The research is out there, one just needs to look past the news headlines. Below you will also find links for videos by Eric Brand discussing the importance of di tao, and Ron Teeguarden detailing some of the sources of his herbs.

Movies about the way... 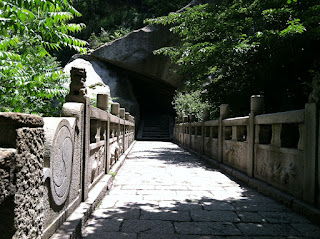 Taking a break from the book list, I thought I might write about some of my favorite movies about spirituality, and martial arts. We'll skip the obvious Crouching Tiger, Hidden Dragon, and The Matrix, enough has been written about them. The films on this list are inspiring, each in their own way, but many of them point to something called kenshō, a Japanese word meaning sudden flash of awareness. It is a Buddhist concept often referred to as stepping into the stream, moments of enlightenment that practitioners sometimes feel along the path. Some teachers say the practitioner is on the right path when this happens, but always we are told not to be attached to the moment. It's called a "practice" for a reason, and these flashes of awareness, or peace, are just sign posts along the way.

Peter Owen Jones is a catholic vicar in the church of England who sets out into the world to rekindle his spirituality. Three of those trips are chronicled in the Extreme Pilgrim series. My favorite is the Shaolin episode. Although misguided at first, Jones attends one of the largest wushu schools in China adjacent to Shaolin to study martial arts and Buddhism. He quickly realizes that true spirituality and modern wushu. even at the Shaolin temple, don't often mix. He then travels up into the mountains to train with an ex-Shaolin monk. There are several incredible moments in the one hour piece, but you actually see the moment where the concepts of zen and dao begin to make sense to him. His entire demeanor softens, and he just gets "it." The third episode in the series finds Jones in the Egyptian desert where he spends time in the caves that Saint Anthony, the first christian hermit, lived and prayed. For anyone who has spent time in solitude and meditation, this should bring back some memories. He pretty much loses his mind for a brief time, and then again finds peace within himself, and is able to come to terms with his demons.

I caught this movie on a plane well before it hit the mainstream, and just one year after I had completed my Shikoku pilgrimage. Martin Sheen plays the father of a man who loses his life on the Camino de Santiago de Compostela. He travels to France to find out what happened, and spontaneously decides to complete the pilgrimage in honor of his son. Well written, and heart warming, if you've been on pilgrimage anywhere in the world this movie will bring the memories, and feelings flooding back. And if you haven't, you'll get a nice glimpse into the life changing experience that a pilgrimage brings.

Jon Braeley's company Empty Mind Films specializes in movies and documentaries about martial arts, wellness, and spirituality. Warriors of China details some of the living masters practicing in China today. Great history, and great details about their arts. Masters of Heaven and Earth: The Secrets of Tai Chi Chuan travels to Beijing, Chen Village and Wudang to visit with tai ji masters. There's some great gong fu in there as well as history of the respective arts and their teachers. And then there's the Shaolin Kid. Once again we find ourselves at a wushu school adjacent to Shaolin, this time with a 12 year old boy who dreams of becoming a kung fu master. It's interesting to watch his training regimen, and to see the efforts his family goes through to enable his training.

Possibly one of my favorite documentaries of all time, Edward Berger is a filmmaker and student of Buddhism who journeys to the Zhongnan mountains in central China in search of modern hermits, and teachers. The home to hermits and masters for over 5000 years, Zhongnan holds a special place in my heart as I have visited many times over the last 10 years, spending time fasting and meditating in caves inhabited by Daoists for generations. Berger interviews several hermits, and for just a moment we get a glimpse into their lives, and their practices.

How is it that a Tom Cruise movie makes on to this list. Well the first reason is kenshō. There are several moments in this film where both Tom Cruise and Ken Watanabe step into the stream, and find peace in the tumultuous world they inhabit. Cruise's character shows that this consciousness can be found even in the middle of a fight or battle, and as we train in tai ji, it is a desirable way to move through combat, and the stresses of life. I love how his character learns about the concepts of budo, and bushido. And the important part of this film for me is how Cruise's character takes notice of the practice that the Samurai have, each day striving towards perfection.

Like the Last Samurai, I enjoy this film immensely, and include it on this list because it illustrates the transformation of a westerner to a way of life she never would have known had she stayed home. As westerners we are often completely detached from nature, from the dao, and the ways of those around us much as Meryl Streep's character is when she arrives in Africa. But as she spends time there, befriends the local tribe, and other expats, she begins to see the world through different eyes, she finally listens to the land, and cares for others outside herself - the Kinanjui, Redford, and of course Farah - her house manager. Farah is such an essential part of her transformation, I would say he is also her spiritual teacher. At the worst moments of her journey he presents words of encouragement, and deep profoundness. I would encourage everyone to watch this movie in a new light, not as Hollywood Oscar winning movie, but as a spiritual journey of a woman during a pivotal moment in history.

That's the list. Check 'em out and let me know what you think....