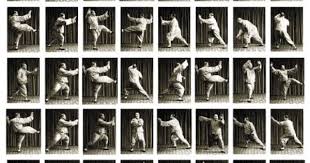 1. Lead the crown upward...
“the appearance of the head is upright, and the spirit reaches the crown. You should not use force. Using force the crown is stiff, and the qi and the blood cannot circulate smoothly or fluidly. With the relaxed energy lifting the crown upward, the spirit of vitality (jing) cannot be used.”

2. Contain the chest, arc the back
“Contain the chest means the chest has a slight inward compression, do not thrust the chest outward, otherwise the qi cannot sink to the dan tien. If the chest is thrust out, the qi will gather and become stagnant in the chest area. The top will then be heavy, the bottom light, and the heels will easily float. Arcing the back means the qi is adhering to the governing vessel. If you can contain the chest, then the back can arc automatically, and the power can be emitted from the spine.”

3. Loosen the waist
“The waist guides the entire body. If you are able to loosen the waist then the feet have power and the root is steady and firm. The variations of substantial and insubstantial (full and empty) all originate from the waist’s turning movement. Therefore it is said the origin of life and yi (intent/inspiration) is in the waist. If you are in a position of disadvantage, you must find the solution from the waist and legs.”

6. Use the Yi and not the Li
“ When training in taijiquan, the entire body is loosening and opening, cannot even have a centimeter of clumsy jin which may cause delay and stagnation of the qi and blood within the tendons, bones, and blood. Then one can be light, agile, varied, and round as wished. You may doubt how can you have power without muscular force? It is because the Jing and Luo (meridians) in the body are like streams and ditches. When the streams and ditches are not blocked, the water will flow smoothly, and the qi will be easily transported. If you use yi, when the yi arrives qi will immediately follow. Transport them day after day until circulating the entire body without any stopping or stagnation. Practice for a long time and you will gain real jin. The Tai Ji Classics said “Extremely soft and then extremely strong and hard”. Those who practiced taijiquan to a proficient stage, the forearms are like iron in cotton”. This phrase "iron with cotton" (棉里铁, Mián lǐ tiě) or a "needle within cotton" (Mián lǐ zhēn) is often heard among internal arts practitioners.

8. Internal and external harmonize with each other
Taijiquan trains the shen, the spirit. “The spirit is the commanding general and the body is the emissary. If the spirit of vitality can be raised, movement will automatically be light and agile. The postures are nothing but insubstantial, substantial, opening, and closing. When the physical body is open, then the xin (emotional mind), and yi (wisdom mind) can also be open at the same time. If the internal and external can be unified as one qi, then the taijiquan will be complete without any gap.”

9. Continuous and unbroken
“In the external martial arts, the jin (energy or force) manifested are post heaven, and clumsy. There is a beginning and an end. When there is continuity and breakage, the old li (muscular force) has already ended, and the new li has not yet been generated. This is the moment that can be attacked easiest. Taijiquan uses the yi without using li. From the beginning until the end, continuous without breaking, when complete, repeating from the beginning, cycling without limitation. “Transporting the jin as drawing silk”, all of this means the movements are threaded through with one qi guided by yi.

10. Seeking calmness in the movements
“The techniques of the external styles grant expertise in jumping and walking, use the qi and li until it is exhausted. Taijiquan uses the calmness to control the movements, though moving remain calm. Therefore, when practicing postures, the slower the better. When slow, the breathing is deep and long, and the qi is sunk to the dan tien. Consequently, there are no harmful problems.”

The 13 Postures of Taijiquan

1). Peng 掤 (Ward-off) Peng is generally thought of as a rising, and expanding energy. It is the expression of yang in taiji. The forward arm in ward-off creates a buffer zone between the tai ji player and his opponent. Peng can used in any direction, and with many parts of the body, such as the wrists in Stork Spreads Wings. If the structure is correct the opponent may bounce off the arms, being repelled away from the expanding force.

2). Lu 捋 (Rollback) Lu is used to draw the opponent into emptiness. Sticking, following, yielding, and redirecting places the opponent into a vulnerable and unbalanced position, he will lose his center. Cloudy Hands is another example of Lu energy. It is yielding, an expression of contracting yin energy.

3). Ji 擠 (Press) Ji is a pressing attack but can also be used to receive an opponentʼs attack as well, and cause the energy to bounce back towards the opponent. The circular action of Ji is like a spring. Think of two points converging to create forward moving energy.

4). An 按 (Push) is described as a wavelike movement, rising, crashing, and then rising again. You receive your opponent energy, yield, and redirect the energy outward back to the attacker, lifting, and driving him off his feet. The power comes from the earth, through the rear leg, the waist, and is expressed in the upper body.

5). Cai 采 (Pluck) Tsai, like plucking a ripe piece of fruit from a tree. Use cai to pull your opponent off balance. Single Whip and Needle to Sea Bottom are examples of cai.

6). Lie 挒 (Split) Lie is used to pull your opponent in one direction, while striking or throwing in the other, splitting his energy in two directions. Parting Horses mane or Diagonal Flying are examples of Lie.

7). Zhuo 肘 (Elbow) Zhou is using the elbow to strike the opponent. It has also been described as “turn and chop with the fist” as in Roll, Parry, Kick, Push, Punch, and Fan through the Back.

8). Kao 靠 (Shoulder) Using the entire weight of the body to strike the opponent. Kao may also be called Lean Forward. It is used to unbalance your opponent, and to setup another attack.


The 5 Steps of Tai Chi
1). Jin Bu – Advancing Jin Bu is forward momentum. We step with the heel first, placing it down, shifting our weight forward, and placing the rest of the foot down, as if we are crossing an iced over stream. Jin is used in any posture or movement that steps forward, like peng, ji, and an, and brush knee palm.

2). Tui Bu – Retreating Tui Bu is used to avoid an attack from your opponent. We allow him into out space, and create even more space by retreating, hoping that he will overextend. This can be seen in roll back, and repulse the monkey.

3). Zuo Gu – Step to the Left Zuo gu is a step to the left as in grasping sparrows tail, brush knee palm, and single whip. It can also be used to close the distance with an opponent in order to counterattack

4). You Pan – Step to the Right You pan is a step to the right as in grasping sparrows tail, brush knee palm, and single whip. It can also be used to close the distance with an opponent in order to counterattack

5). Zhong Ding – The Center Zhong Ding is the center position, as in wu ji posture, beginning tai ji. Steadiness here builds the root from which all other forms and movement are born. Postures include wu ji, and crane spreads wings.


The 5 steps of Taiji quan are advance, retreat, left, right, and center. The center is represented in our ability to root into the earth. Without a solid root we cannot move easily, nor with agility in taiji.