Kuo Lien Ying (1895-1984) was born in Inner Mongolia just before the turn of the 20th century. He is known to have brought Guang Ping Yang taiji to the USA.

Like many internal martial artists of his day, Kuo started with hard or external gongfu styles at a young age. He studied Shaolin and Northern Longfist with Master Li Lin at the age of 12.

Kuo became an indoor student on Wang Jiao-Yu, who was himself a indoor student of Yang Ban-Hou, son of Yang Luchan, founder of the Yang style of taiji. It is said Kuo had to complete the "Chin to Toe" stretch in 100 days before he would be accepted by Wang who was 100 years old at the time.

Kuo went on to study xingyi with Huang Gin Yim and bagua with Chang Xin Zhai and Cheng Ting Hua.

Kuo famously was a bodyguard for gold caravans throughout China. His rope-dart skills were legendary. After serving as a general in the army of Chiang Kai Shek he fled to Taiwan where he married Ein Simmone Kuo. In 1965 Kuo emmigrated to San Francisco, and one year later brought Simmone to the USA.

His American students helped setup a school across from Portsmouth square, and since his passing hold a memorial in the park every year. 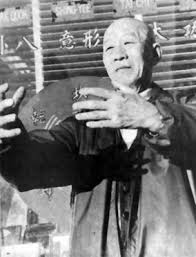 Kuo believed that there must be a blend of hard and soft styles for taiji to be effective, and that when "yielding you must be conscious of unyielding, and that is the only way you can take advantage of all things." 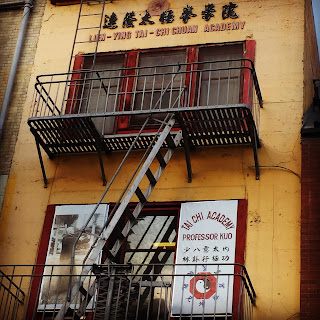 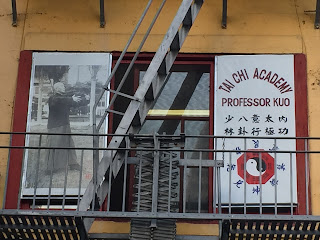 Kuo was so confident of his fighting skills that in 1951 he issued a challenge to world boxing champion Joe Louis, to meet him for a fight. In 1972 Kuo claimed to the San Francisco Chronicle, "I could have thrown him."
Posted by Rob Hoffman, DAOM, L.Ac. at 12:17 PM No comments: